The D350 is a professional hardware decoding device that can simultaneously decode up to 9 network video streams and then output them through both 3G-SDI and HDMI interfaces in synchronization, with up to 4Kp60 output resolution.

With a built-in LCD screen, users can monitor the IP status and decoding parameters in real-time.

The D350 concentrates on every decoding detail for a better decoding quality.

D350 supports simultaneous decoding of up to 16 channels of video streams(It depends on the resolution*). It allows for customization of multi-output display including grid and PIP. With D350’s incredible performance and three output ports(two HDMI 2.0 ports and one 3G-SDI port), It’s also capable for outputting in three ways: Independently, Combine multi-channels video flows or replicate of one single flow to stream simultaneously.

Besides outstanding performance in video decoding, D350 is also super powerful in audio decoding. With a long list of audio formats supported including AAC/AAC/MPEG-4/MPEG-2/G.711/Opus/LPCM, It’s also capable of switching audio On/Off, audio mix and audio gain in real time to output alternatively through its HDMI ports, SDI port and 3.5mm line out port.

Full Protocols Supported to Meet All Your Demands

To accommodate your various workflows, the D350 is compatible with all protocols, including NDI|HX2, NDI|HX3*, Full NDI, SRT, RTMP, RTMPS, HLS, TS over UDP, RTP, and RTSP.

*  Support of full NDI will be available with the next firmware version update.

*  Support of NDI|HX3 is still in beta version.

D350 allows users to freely choose the output interface among 3G-SDI and 2 of 4K HDMI for outputting the same or different video sources in synchronization.

The D350 guarantees outstanding image quality and low transmission latency with a decoding delay of less than 200 ms and a packet loss rate of less than 10%.

The D350 guarantees outstanding image quality and low transmission latency with a decoding delay of less than 200 ms and a packet loss rate of less than 10%.

As an update to the D300, D350 is equipped with a 0.9-inch LCD screen for a better user experience. With the built-in LCD screen, users can easily check the IP and decoding status in real-time. 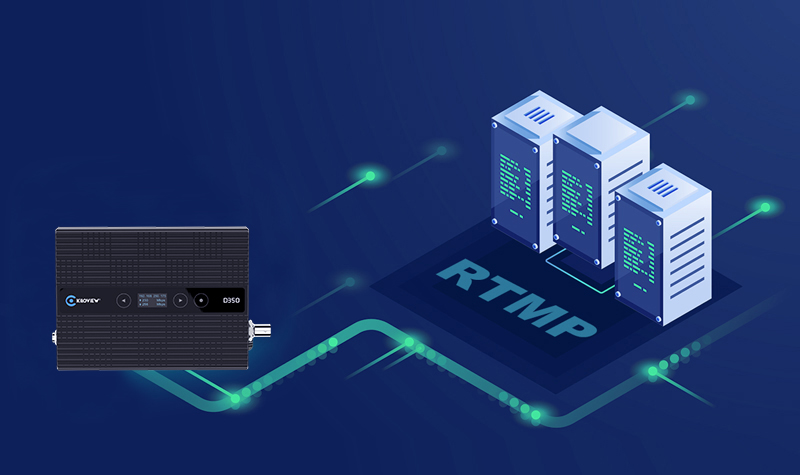 With RTMP Server, D350 can simplify the video decoding workflow by directly accessing a video encoder and outputting video streams through RTMP without any relay platform.

The D350 is equipped with dual USB interfaces for users to:

Free Layout: The users will be able to customize the output display in grids or a free layout like PIP, PBP, or POP.

You will be able to pick 9 of the streams for output on displaying screen from the 16 real-time video streams or images previewed on the web page.

Unlimited video sources can be added, any video source can be freely selected for decoding, and dynamic switching can be performed.

Users can configure background subjects including LOGO, frame, and graphic overlay with the D350. The PVW window will also display the personalized information at the same time.

End-to-end real-time intercom can be realized through the USB expansion headset. For group communication, you can deploy the Kiloview Intercom Server (KIS).

D350 can connect to the KiloLink Server seamlessly which can optimize media transmission by any Kiloview products using any available network links. It helps to manage, monitor and control all the devices throughout the process.

4K Resolution, up to 9 Channels
Go

Quick Comparison of our Decoders

Sign up to receive the latest news, exclusive offers, and product updates