As the most widely used IP video technology, NDI has been available in its fifth-generation format for almost a year, ushering in a new era of AV-over-IP production for remote live production. In order to figure out how it should fit into organizations’ technology strategies, it’s important to first assess its impact.

Among a range of significant improvements, NDI 5 delivers support for the Reliable User Datagram Protocol (RUDP). Previously, multi-TCP acted as the default transportation of NDI, but the efficiency of network bandwidth utilization was low, especially for wireless applications or when the network was not as effective, adding significant challenges for real-time transmission. NDI 5, however, uses a new transmission mechanism of RUDP, known as Quick UDP Internet Connections (QUIC), to perform better in an unstable network.

NDI 5 is compatible with various operating systems, including Windows, Linux, macOS, and Android, and it also runs on different CPU architectures. That means NDI can run not only on Windows/Linux/macOS, but also on ARM-based M1 Mac Mini or Android, as well as all the other ARM-based embedded systems. NDI’s ability to work with both high performance servers and low-cost embedded devices is exciting—and is likely to act as a catalyst for innovation in the development of different types of NDI products and devices.

In another meaningful development, NDI also released the NDI|HX3 standard, which will hopefully address the bandwidth limitations associated with the previous iteration by using H.264/H.265 encoding.

In considering alternatives, technically speaking, both NDI and Secure Reliable Transport (SRT) are great technologies with their own advantages. Both have a lot of supporters and have had a great influence on the Pro AV industry. Before the launch of NDI 5, NDI was mainly applied to local transmission, with SRT used for remote live production—but today, NDI 5 has blurred the lines between the two.

For internet applications, SRT has its advantages such as low latency, good security and flexible handshaking/connection methods, and higher reliability and multi-path transmission, among others. However, from a more strategic perspective, the choice of whether to use NDI or SRT will depend on considerations such as workflow and usage habits.

Other key questions include: Which technology ecosystem is more complete? Are there more vendors supporting the technology and driving it more strongly? Which of them can each organization benefit from more? By considering these points, the answer then becomes clear for each user and organization.

Despite its various enhancements,NDI 5 isn’t without its potential pain points. The first concern is the limited image quality of high-bandwidth NDI, especially in relation to 4K resolution. This relative lack of performance may create problems, and it remains to be seen if NDI|HX3 can fully address them.

The second concern relates to security. Since NDI is plug-and-play, no authentication is required for video connection. This is not a significant issue on local networks, but certainly needs addressing for internet applications. One of the most problematic aspects, however, is its software-based NDI encoding capability, which compared to decoding—and especially on the ARM CPU—is currently a limiting factor for application development.

In production workflows, it’s not certain that NDI 5 will help handle every requirement, especially when talking about broadcasts and larger live shows, because a rounded set of products is required to support an entire ecosystem. For those directly using NDI 5 tools, it will only benefit some small productions, as it depends on the performance of the hardware they use. Many will find they are limited to 8-10 channels of NDI sources.

Instead, those organizations that need to handle NDI sources in greater volume for major events will need to build routing and management, multi-view, and recording capabilities separately. In these scenarios, the solution lies in utilizing specific software products based on the NDI 5 SDK, which can manage unlimited NDI sources, monitor all the sources in the network, and record and backup.

As cloud-based video workflows become the norm, NDI is likely to remain an important I/O standard. While video capture and output cards are the basic I/O devices for baseband video entering a desktop-based video production system, NDI ensures the entire workflow is visible when video I/O can only be IPbased. For remote live production, it points toward an exciting and innovative future for those organizations looking to embrace IP infrastructure.

Complex productions can be problematic when managing large numbers of inputs and outputs. NDI Router, a free app in the NDI Tools suite, allows users to route NDI sources as custom inputs to selected outputs with a simple click. Buttons can have bespoke names, and styles and users can preview the source assigned to any destination—making it easier than ever to manage and control inputs and outputs without supervising each stream independently.

Building on NDI Audio Direct, NDI AudI/O now allows SDK users to connect any audio device as an NDI source without the need to use third-party software applications. This feature significantly simplifies workflows, saving time and removing a layer of complexity. 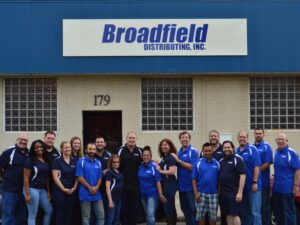 Kiloview To Launch Its New 12G-SDI to NDI Converter N50

Sign up to receive the latest news, exclusive offers, and product updates