Why is my Stream Lagging and How to Fix it?

If your stream is lagging or choppy, or your streaming tool (such as OBS) is dropping frames, this article is for you.

Streaming to public platforms costs extra network resources. Therefore, it sometimes may not be necessarily sufficient for such a heavy task (playing and streaming).

We will cover bandwidth, bitrate, latency, and network devices for network conditions related to your stream.

When you are watching a movie online or visiting a website, you use mostly the downloading bandwidth. In contrast, while you are streaming, you rely more on the uploading bandwidth, as streaming apps or devices upload your video data to remote public servers.

When we search “google speed test”, we will see a built-in widget. We can test our speed and get a rough idea about our bandwidth information.

If your stream is laggy, try to reduce the stream bandwidth cost or increase the remaining uploading bandwidth to ensure it is sufficient for your stream.

Bitrate is the rate for your stream data in bits. If it is higher, the video quality of your stream comes better but requires more bandwidth and vice versa.

Unlike bandwidth, you can set your own stream bitrate in most of the streaming software or hardware. In some cases, you can even choose a “VBR” option (Variant Bitrate) to get a variable bitrate.

If your stream is laggy or the frame drops, try to set a lower bitrate. To strike a balance between quality and fluency, you’d better select the stream bitrate to 2000-3000kbps in OBS default settings.

Your stream data needs time to go over the internet. Typically, the data travel time (the latency) from your computer to the remote stream server is related to:

For the encoding algorithm, if you use HEVC (H.265), then the latency is higher than that of AVC (H.264), as H.265 requires more cached frames by default. That’s why sometimes changing your encoding algorithm from HEVC to AVC might help you to reduce latency.

The latency increases if you have chosen the wrong stream server. Let’s take Twitch as an example. Visit https://stream.twitch.tv/ingests/, and you will see a list of automatically suggested RTMP servers:

If you are based in Hong Kong but selected Tokyo as the primary stream server, the data travel latency will apparently be higher.

The latency can also increase if your streaming device is in a deep subnet. Namely, if your stream computer or hardware encoder is under several routers, connect it directly to the main router can reduce the latency.

If you have a poor router or an old network adapter, the data processing ability in your network might be significantly affected. That can be part of the reason why your stream is stuttering. You can test it by running the following command:

It will send the IGMP package to Google continuously. Watch the real-time response for a while, and press Ctrl + C to terminate it. If the output drops occasionally or the calculated packet loss exceeds 1%, your router or NIC might be overwhelmed by the non-stopping communication and drop data packages.

Updating the router or the computer NIC to a better one can improve the communication stability and thus solve the laggy stream issue.

As we have listed the network factors related to your laggy stream, the improper setting for these parameters on streaming tools can cause chopping stream also.

In this case, we will take OBS as an example to give you an idea of these rabbit holes.

If it is higher than 3000 Kbps for 720P video output, consider reducing it:

Go to “Settings” -> “Video”, and check the base (canvas) resolution and output (scaled) resolution.

1920×1080 resolution uses more bandwidth and requires a higher bitrate. If your stream is laggy, try to lower the output resolution value.

Go to “Settings” -> “Video”, and check the FPS values. FPS is the frame rate that determines how many frames passes in one second. The higher the FPS, the smoother the stream, and the more network stress it poses.

If you are streaming and playing on the same PC, the CPU and graphic card of your computer may suffer from the excessive task of:

If you are using OBS as the encoder, you can see the real-time monitoring of CPU usage on the right bottom:

As we have explained before, the reason for your slow stream varies from case to case. We need to check the reasons one by one and find out the actual factor that affects our streams.

Here is a checking list for OBS setting to help you fixing the lagging stream:

If you have a choppy or blurry stream from Twitch studio, or your Discord stream (game, screen share) is lagging, try to test the following stream settings:

For many of the game clients, go through the following settings:

You can check the following list for relevant devices:

Here are more suggestions that may be helpful to deal with the laggy stream:

Q: Why is my Xbox/Facebook stream lagging?

A: The reasons are the same as OBS laggy stream. You can check the following list:

Q: Why does my OBS stream frame drop?

A: According to OBS’s official explanation, frame drops because of unstable connection or too much network stress. To fix it, try:

Q: How to fix stream delay?

A: A delayed stream is normal: the video data needs time to go through such processes as encoding, transmission, buffering, and platform monitoring.

To reduce the delay and interacts with your audience in real-time, you can try:

A: Try to stabilize your connection by using a wired cable, or improve available bandwidth by stop unrelated App usage.

Q: What a hardware encoder can do for me?

A: A hardware encoder captures your computer screen and encodes it into a live stream. Then it pushes the stream to multiple platforms automatically.

Therefore, it works as:

You can use it to capture your computer (as well as a camera) and stream your content to multiple platforms (such as YouTube, Twitch, Facebook) configured in the built-in console.

Kiloview with New Products and Solutions at IBC 2022

Kiloview Interviewed by KITPLUS at IBC 2022 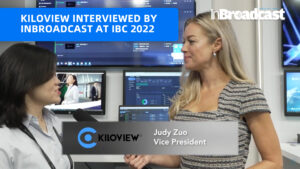 Kiloview Interviewed by InBroadcast at IBC 2022

Kiloview was live! Explore Every Detail Of The N60.

Sign up to receive the latest news, exclusive offers and product updates